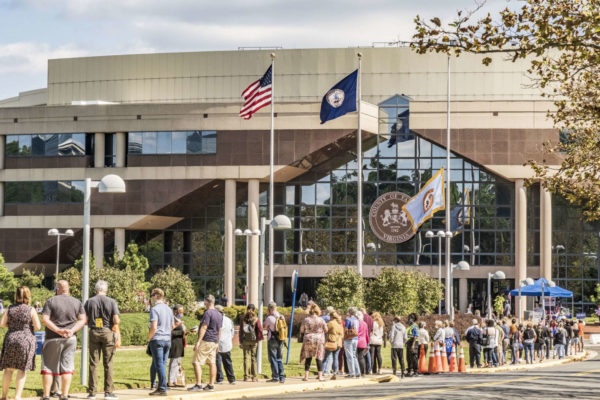 Early voting locations were scheduled to start opening on Saturdays on Oct. 17, but the Fairfax County Office of Elections announced on Tuesday (Oct. 6) that it will commence Saturday hours this week instead to accommodate record numbers of early voters, who have faced long lines and extended wait times.

“The short answer is due to the large number of requests from voters, from elected officials, and my electoral board all asked that we consider if it was possible to provide an extra day of voting,” Fairfax County Office of Elections director and general registrar Gary Scott said when asked about the change.

Voters can cast absentee ballots this Saturday from 9 a.m.-5 p.m. at the government center, which is currently the only place in Fairfax County open for early voting.

Additional relief from the crowds that have swarmed the government center since early voting began on Sept. 18 will arrive on Oct. 14, when 14 satellite voting locations open — almost twice the number of sites that the county provided in past years, according to Fairfax County Board of Supervisors Chairman Jeff McKay.

Early voting hours at these locations are from 1-7 p.m. on Mondays through Fridays and 9-5 p.m. on Saturdays. All sites are closed on Sundays.

The Fairfax County Office of Elections reported on Thursday that voters have cast almost 62,500 vote-by-mail ballots so far, a 40 percent increase over the total from 2016, the last year with a presidential race on the ballot.

City of Falls Church director of elections David Bjerke told WUSA9 that the city has seen 100 to 200 voters coming in-person every day, and 5,337 people — 50% of the city’s voters — had either cast or applied for a mail ballot as of Oct. 6.

In-person early voting ends on Oct. 31, and the last day to request an absentee ballot by mail is Oct. 23. Absentee ballots must be hand-delivered to a polling location or postmarked by Election Day on Nov. 3, with Nov. 6 as the deadline for the Office of Elections to receive mailed ballots.

Scott warned voters against requesting a ballot by mail and then trying to vote in-person.

“Having requested a ballot by mail will slow down their process when they go in and try to vote in person,” Scott said. “They’re certainly welcome to do it. They just need to understand that it will take longer for them, once they check in, to actually vote than it would be to return the ballot, either by mail or putting it in one of our drop boxes.”