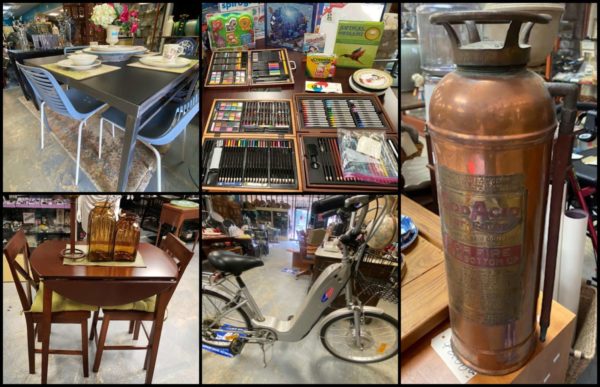 Like many small businesses, the Clock Tower Thrift Shop in Falls Church took a major financial hit during the pandemic. But unlike other businesses, the store supports the Northern Virginia Family Service (NVFS), a nonprofit that serves 35,000 people.

The thrift store lost roughly $120,000 during its three-month closure in the spring, Leyla Alijani, the director of NVFS Ventures, told Tysons Reporter. The store started to slowly reopen in late June and is now looking for ways to reach new shoppers and recoup its losses as the pandemic continues.

“It was hard,” Alijani said. “It was super, super hard. We’re just grateful, really grateful to be open again.”

The tiny store (2860 Annandale Road) is the last remaining one supporting NVFS programs after the other four stores closed over the years due to rising rents and online shopping, Alijani said. The 4,500-square-foot store in Falls Church opened 20 years ago and has remained profitable, she said.

The shop is run by three staffers and volunteers, who clean and refurbish the donations — often from private estate sales and people who are downsizing.

The store caters to thrifters, first-time home buyers, collectors and resellers. Shoppers can find art, furniture, $2 t-shirts, vintage items, lamps, rugs, clothing, sporting equipment and more. To be extra cautious during the pandemic, however, the store is no longer selling beauty items, pillows, bedding and dolls for kids.

“The purpose of it is to provide below-market rates so that it’s accessible to everyone’s budget,” Alijani said.

Home items have gained popularity at the shop as more people look for work from home desks, smaller pieces of furniture, games and school supplies. “We have more of a demand than we have supply,” Alijani said.

All of the sales fund NVFS programs, which range from a shelter for people experiencing homelessness to early childhood education to workforce development. Previously, the sales have benefitted mental health support and foster care kids, Alijani said. It’s unclear at the moment how much the financial loss from the spring will impact NVFS programs, she said.

She also wants to erase any stigma attached to coming to a thrift store and expand the customer base beyond the regulars. “There’s no shame in going to a thrift store, because it supports the community,” Alijani said. “It’s cool, one-of-a-kind stuff.”

The store’s exterior likely won’t catch drivers’ attention, especially since they might be disappointed that the store is not as big as it appears outside, Alijani said, noting the store only occupies the first level of the two-story building.

“It kind of looks like a dive from the outside,” Alijani said.

To make it more well known in the area, Alijani said plans are in the works to launch an online presence for the store so people can see more of the available items.

Drop-off donations are accepted from 10 a.m.-5 p.m. on Mondays and from 10 a.m.-2 p.m. on Saturdays. On Tuesday, the staff schedules pick-ups at people’s homes for bulky donations.

“It looks like a cube, but once you go in, it’s like a little jewel box,” Alijani said.