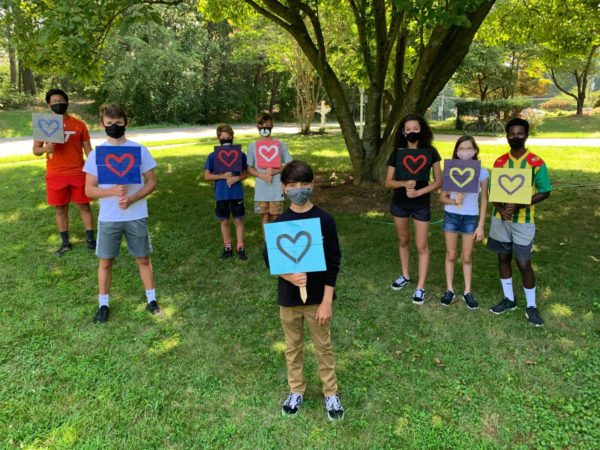 A group of eight kids came together this summer to spread love in the Vienna community via wooden signs with painted hearts.

The group, which calls itself Rustic Love Vienna, created and sold the signs to benefit the Vienna VA Foodies Facebook group, which supports local restaurants, frontline workers and food-insecure families.

The idea came together after seeing Signs of Hope Delaware, a family business selling signs for profit after losing their jobs. Michelle Davila, the adult organizer of the group, decided to try and recreate the signature heart sign with wood in her own basement. She then involved her children, and Rustic Love Vienna took off.

They wrapped up their orders on Friday, July 31, with a total of $6,220 raised, according to Davila. The children produced about 250 signs for the community, which can be spotted in yards when driving around Vienna.

“Driving around town and seeing them, I don’t know where they all go,” said Davila. She said seeing the signs when out and about reinforces the experience’s positivity and productivity.

While Davila was the adult in the group, her son and two neighbors were the people running the project. Kids would rotate between sawing, drilling and painting to make the signs.

Not only did kids from the neighborhood join the group, but also kids whose parents heard about the initiative and had an interest in joining. A neighbor even provided wood leftover from a previous project, according to Davila.

“It’s been super, super rewarding,” said Davila. “The amount of money we’ve raised for this group… has been a great thing for my kids to be able to experience.”