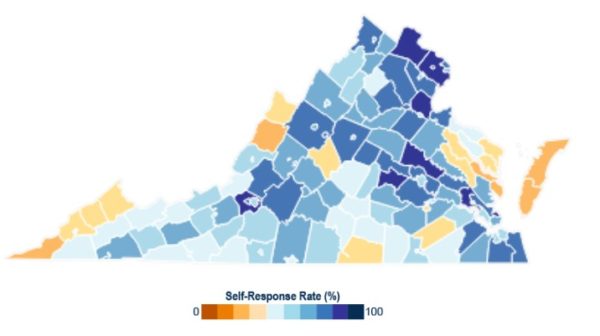 Fairfax County has one of the highest response rates to the U.S. Census in Virginia.

While the pandemic at first extended the submission deadline, the Census Bureau plans to cut short its door-knocking efforts, moving the deadline from Halloween until Sept. 30, The Hill reported last week.

Last week, the City of Falls Church took to Twitter to encourage residents to fill out the census, saying that one in four people haven’t been counted yet. As of today, the Little City’s response rate is 79.6%.

We're so so close to that 80% #Census2020 response rate, but that means around 1 in 4 City of Falls Church residents still haven't been counted…yet. Don't be that 1 in 4. Complete the Census online today at https://t.co/hPf185pQMS. pic.twitter.com/neuFHtJ3hL

Falls Church said that Census workers have been going door to door in the city since July 23 and might stay until the fall.

It’s unclear yet how much the door knocking will boost the response rate. A recent Pew Research Center survey found that four-in-ten residents who have not yet responded do not want to answer their door.

People who haven’t responded to the Census can complete it by filling it out online, returning the form mailed in March or calling 844-330-2020.