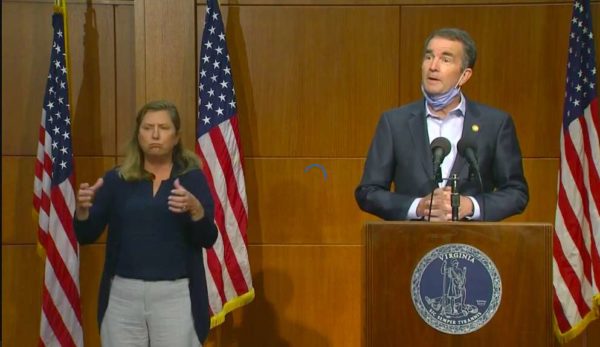 At a press conference yesterday, Gov. Ralph Northam said that he is increasing enforcement of public health and safety regulations to prevent a statewide surge in COVID-19 cases.

“If you own a restaurant or a business and you’re not following the regulations, your license will be on the line and we will not hesitate to take action if needed,” Northam said.

Northam said he’s created teams to conduct unannounced visits to establishments. Members will include people from the Virginia Department of Health (VDH), Virginia ABC, Department of Agriculture and Consumer Services and other licensing agencies. The VDH is deploying 100 employees to help with increased enforcement, he said.

Businesses have the right to refuse service to customers who are not following the rules. “Remember that you don’t have to serve a patron who is not wearing a face covering. You can tell them to leave,” Northam said.

Additionally, Virginia’s health commissioner sent letters to health district officials to remind them of their authority to enforce physical distancing and face-covering rules in restaurants and public places, Northam said.

“I want to make it clear that these enforcement actions are to stop the people who are clearly flouting the rules: You are being selfish and you are hurting everyone who is doing the right thing to help us all beat this virus,” Northam said.

The new measures stem from a large bump in cases in the state’s eastern region, mainly in the Tidewater region, Northam said, attributing to the surge mainly to young people socializing without masks.

The northwest region is “holding steady,” while the southwest and central areas have seen either small increases, Northam said. Northern Virginia, which has two-thirds of the state’s population, has seen a dip in COVID-19 cases.

Until a vaccine is widely available, Northam said that he is considering other actions, like reducing the cap on gatherings. Northam said has told the Virginia ABC to develop a plan for an earlier cutoff for alcohol sales at restaurants and will announce more on that soon.