Northern Virginia’s COVID-19 cases appear to be holding steady as Virginia sees an uptick in cases.

Statewide, new daily cases hit a low point in mid-June with 380 cases before an increase last week, according to the Virginia Department of Health. Last Monday, 354 new cases were reported in Virginia before jumping to 972 new cases today (Monday).

Testing for current and past infection has been increasing statewide, according to labs’ testing numbers.

Meanwhile, the Fairfax Health District has seen consistent numbers of tests since June with 1,000-2,000 tests per day.

The current seven-day trend for the percentage of positive tests is 6.7% statewide and 5.9% for the Fairfax Health District.

In mid-June, Fairfax Health District saw the majority of its new daily cases drop from triple digits to double digits. As of today, 74 new cases were reported in the health district. 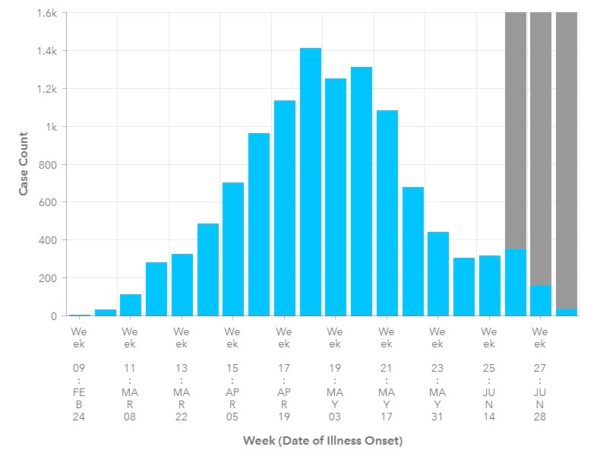 The epidemic curve for the Fairfax Health District, which shows the number of new cases in a week by the date symptoms started, has been decreasing since May, according to Fairfax County’s dashboard. (Data has not been completed from June 28 to today.)

Photo by CDC on Unsplash, graph via Fairfax County

more stories
Previous
Poll: Which Back to School Option for FCPS Do You Prefer?
Next
Falls Church Lands Funding for Multimodal Projects