Detectives with the Fairfax County Police Department are seeking the public’s help to solve a sexual assault case from 1995 in Merrifield.

“This case is about seeking justice for the victim,” Major Ed O’Carroll of the Major Crimes Bureau said. “Victims of horrendous attacks like this one, no matter how long ago, should not and will not be forgotten.”

Police provided this summary of the incident:

In August of 1995, a 24-year-old woman was sexually assaulted in the 8100 block of Prescott Drive in Merrifield. The suspect entered her apartment while she was sleeping, produced a weapon and sexually assaulted her. During the assault, a struggle ensued, and blood evidence collected revealed that the suspect likely sustained an injury to his upper body. The suspect was last seen fleeing out the patio door.

Evidence and DNA had been collected and previously submitted to a state forensics lab. During that process, DNA was isolated from a blood sample from the victim and from the DNA left at the scene. A DNA profile identified as belonging to the suspect was searched against the Virginia DNA Data Bank. There was no identified DNA match and the suspect’s identity remains unknown.

To engage the public in cracking the case, the police department released a composite sketch of the suspect that was done in 1995, a digital enhancement of the sketch and a third image showing an age progression for what the suspect would likely look like today between the ages of 45-55.

“The original release described the suspect as a black male, however a more accurate description would have been a man with a medium complexion,” police said. 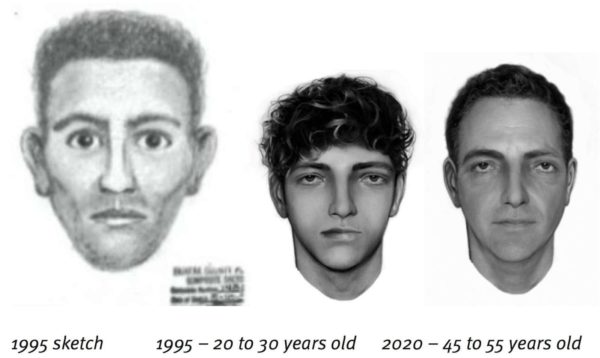 “Working on solving these types of cold cases takes tremendous teamwork,” O’Carroll said. “I have great admiration for our detectives, victim advocates and extremely thankful for our strong partnership with experts from the National Center for Missing and Exploited Children for getting us to this point.”