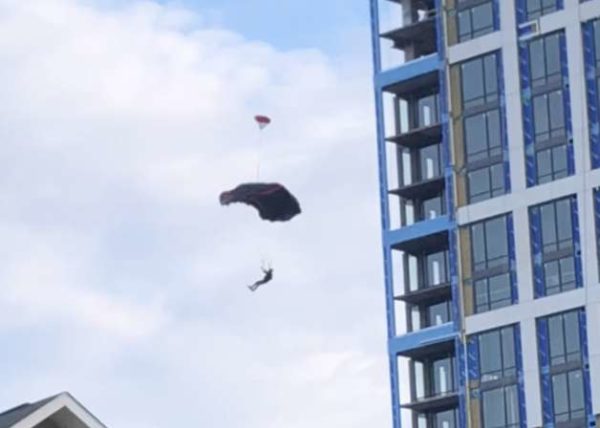 Tysons is no stranger to people jumping off of its tall buildings. Now, a building under construction at Capital One’s campus seems to be the latest spot for parachuters.

Two videos posted by Reddit users on Sunday (April 5) each appear to show a person parachuting off of the building that will include a Wegmans store, rooftop park, residential units and parking.

One dash cam video recorded at the intersection of Colshire Drive and Dolley Madison Blvd appears to show a parachuter float down from near the future Wegmans building and land in the middle of Scotts Crossing Road.

The user who posted the video said that the incident happened around 6:30 p.m. on Sunday.

The second video, which was taken in The Gates of McLean development, appears to show a parachuter jump off the building.

“Two people jumped,” the user who posted the second video said in the comments. “I saw the first jump out of the corner of my eye and was able to catch the second on my phone.”

Police checked the area around the building, but weren’t able to find the jumpers, Bedor said.

“We are aware of the situation and have been in contact with local authorities,” a Capital One spokesperson said when Tysons Reporter asked about the Reddit posts.

On Monday (April 6), police took a report of a trespassing complaint in the 1600 block of Capital One Drive that happened on Sunday, Bedor said.

“Officers are actively investigating to determine if the trespassing complaint is related to the event described on [April 5],” he said.

People have jumped off of Tysons buildings seemingly for fun in the past. Previously, police investigated a series of BASE jumping incidents at the 32-story Lumen building.

“Dangerous and illegal activities such as this, particularly during a time when emergency medical services are already operating under pressure, are irresponsible and put unnecessary strain on limited community resources,” the Capital One spokesperson said.

BASE Jumper in Tysons this evening from nova

Idiots Parachuting in Tysons from nova