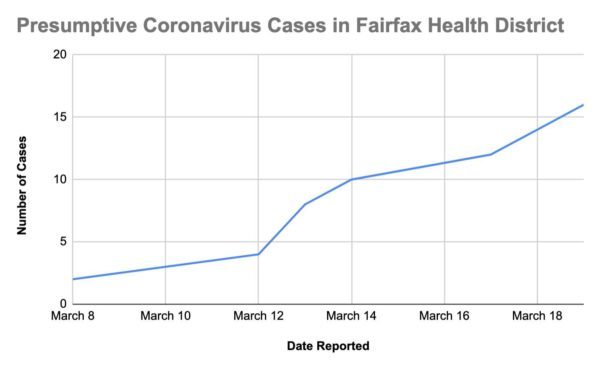 Local public health officials have found evidence that COVID-19 is now being spread via community transmission in Northern Virginia, according to a county press release.

As of today (Thursday), there are 16 presumptive cases in the Fairfax Health District, which also covers the City of Fairfax, the City of Falls Church and towns within the county, according to the Virginia Department of Health.

According to the Centers for Disease Control and Prevention, community transmission refers to when the spread of illness is linked to unknown sources.

“Community transmission, or ‘community spread,’ is defined by the CDC as a ‘spread of an illness for which the source of infection is unknown,'” according to a City of Falls Church press release.

Initial cases of the respiratory disease in the county were first linked to local residents who had contact with North Carolina residents with coronavirus. Two cases were linked to the Reston-based headquarters of the U.S. Geological Survey, according to a recent Reston Now exclusive.

Local officials continue to urge residents to practice social distancing as much as possible. Social distancing involves increasing the distance between people to avoid spreading the illness. Health officials say that staying at least six feet away from other people lessens the chances of catching COVID-19.

In roughly 10 days, the number of presumptive county cases has jumped from two to 16.

Data via Virginia Department of Health