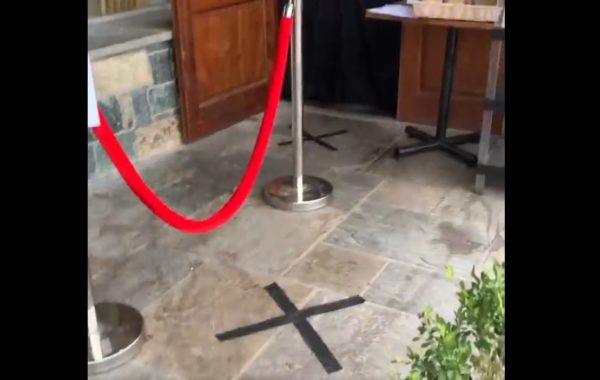 (Updated at 5:40 p.m.) Caffe Amouri wants to reduce close contact between the people coming to the Vienna coffeehouse, as concerns spread about the coronavirus outbreak.

The Centers for Disease Control and Prevention recommends that people stay six feet away from each other to lower the risk of spreading the virus.

“Helping everyone ‘Keep their distance,'” the cafe tweeted along with a video showing large “X”s made of masking tape on the ground leading up the cafe.

In another video, owner Michael Amouri shared that the “X”s, which are six feet apart, lead to a window counter — formerly the front door — where people can place their orders and pay. The orders will be filled inside and then brought outside to the customers.

At the window service, one cashier wearing gloves places the order, while another person goes to get the coffee, Amouri told Tysons Reporter. Each drink is brought out on its own pedestal so that customers won’t touch the tray, he said.

Amouri said that he ordered 10 stylus pens that will be sanitized after every use so “no customer will be touching a pen that a previous customer touched.”

Tuesday evening, the coffeehouse announced on Instagram that it won’t accept cash while the coronavirus concerns are growing.

On Facebook, the coffeehouse announced on March 13 that all of its events are temporarily canceled. In other videos, Amouri said that other recent changes include:

Amouri said that people who don’t want to come to the shop can order beans online — “We’re getting hit by a ton of those” — and buy gift cards for future visits.

Amouri said that the cafe’s staff keeps stepping up its coronavirus-related efforts. At first, the employees were sanitizing the shop shift by shift and the hour by hour.

As more and more people started to telework, Amouri noticed that the shop was getting more crowded, which prompted him to switch to the outdoor counter last Saturday — an idea from one of his employees.

“The danger shifted from their workplace to our shop,” he said. “I’m really concerned about our staff.”

Amouri said that he has given his employees two weeks paid vacation so that they can stay home if they feel sick.

“I just want to keep my staff working. That’s really important to me,” he said. “Even if we don’t break even, which we probably won’t, if I can minimize the loss and keep them around, then that’s my goal.”

No matter what, he plans to keep the coffeehouse open, he said.

“We’re open,” he said in one of the videos, urging people to support their local businesses. “We’re going to get through this everybody.”