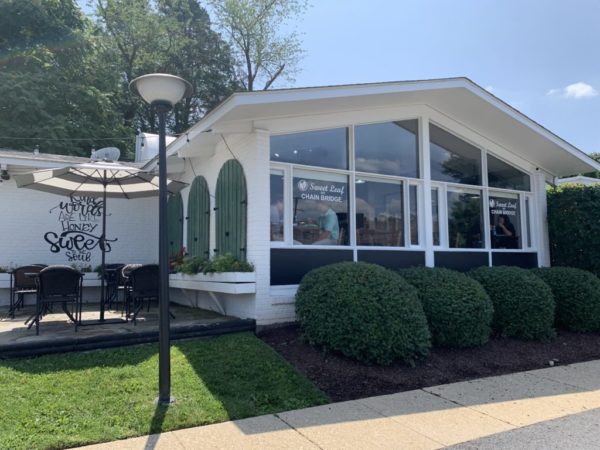 It’s been almost five years, and Sweet Leaf in McLean is still working to resolve a zoning violation caused by too few parking spots.

The Fairfax County Board of Zoning Appeals decided today (Wednesday) to defer Sweet Leaf’s appeal of its zoning violation for at least the 14th time.

“It’s been a long time, but we’ve been working through this process,” Sweet Leaf co-founder Andre Matini told the board today.

The restaurant has been operating in violation of the zoning code since late 2015, county staff said today.

Over the last few years, zoning changes have affected the cafe, which was originally slapped with zoning violations in 2015 following a complaint about a lack of parking.

One of the zoning violations is now “moot” after the Board of Supervisors adopted changes to the zoning ordinance in 2018, staff said.

When those changes were made, however, the cafe’s other zoning violation became more challenging to fix.

The cafe was incorrectly issued a non-residential use permit (non-RUP) for retail sales but not for food, staff said.

In order to qualify for the correct permit now, the cafe needs to have at least 14 parking spaces with an approved parking reduction — but it only has 12.

Getting the two extra spaces has been more challenging than expected, Matini said.

The county rejected a nearby church’s offer for diners to use its parking lot, Matini said. Now, another neighbor will let the cafe rent two spaces, he said, adding that county staff has been asking for more information.

If the parking reduction fails, then the cafe would need to decrease the square footage of the building.

One of the new changes to the zoning ordinance altered how the number of parking spaces is determined. The building’s square footage — instead of the number of tables at the food establishment — is now used to calculate the parking requirement.

So far, Land Development Services thought the information submitted for the parking reduction request has been “insufficient,” according to the staff report.

Fairfax County Zoning Administrator Leslie Johnson urged that the board make a “short deferral” to push the appellant to get all of the required information to county staff, who said there hasn’t been any recent progress on the parking reduction application.

“We’re not 100% sure how we would resolve the issue if everything is denied by the zoning office,” Matini said. “Obviously, we don’t want to shut down after all of these years in operation.”

The zoning board, staff and Johnson said they want to avoid a situation where the cafe would be forced to close. Dranesville District Supervisor John Foust has also said that he wants the restaurant to stay open.

To give the cafe and the county staff more time to get all of the required materials for the parking reduction application, the Board of Zoning Appeals decided to defer the case to July 22.

“It sounds like people are working hard to resolve this, but they quite aren’t to the finish line yet,” Chairman John Ribble III said.