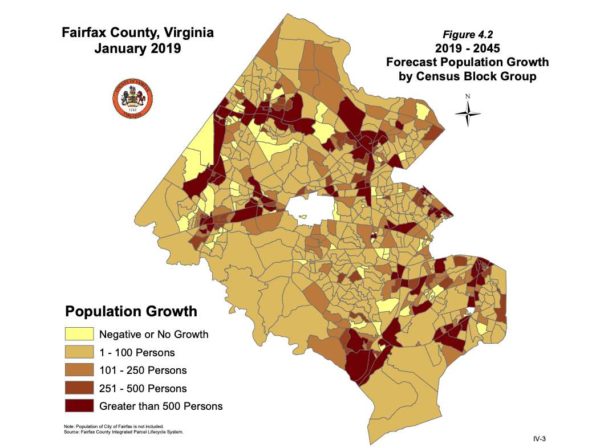 The Tysons area is projected to have more than 50,000 new residents in 25 years.

Released in December, Fairfax County’s demographics report highlights current and past estimates, along with projections for future population growth.

Broken down by district, the data in the report that is mentioned below came from the U.S. Bureau of the Census and the Fairfax County Department of Management and Budget, according to the report. 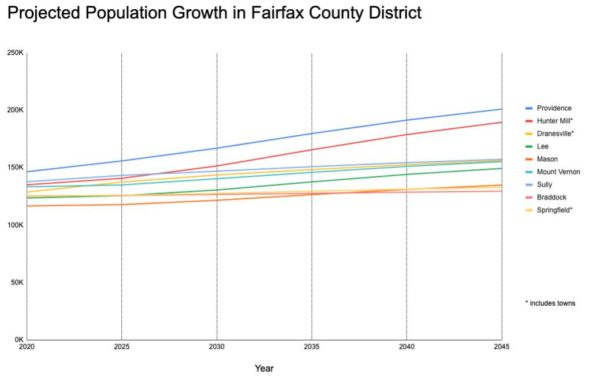 Providence District’s population is expected to spike the most of the county’s nine districts in 25 years, with roughly 57,000 more residents expected in 2045 than in 2019.

Other districts, like Sully, Mount Vernon and Mason, are projected to have an increase of roughly 20,000 residents, while the Braddock and Springfield districts are expected to see less than 10,000 new residents.

While the Tysons area is expected to have the biggest population increase, a Fairfax County press release noted that the data in the report shows that population growth overall is slowing down.

“While our population continues to increase, it’s at a slower rate than before, mirroring national trends as there are fewer births and more deaths nationwide,” the press release said. “Since the 2010 Census, Fairfax County’s population grew at 6.4% compared to Virginia’s 8% growth rate.”