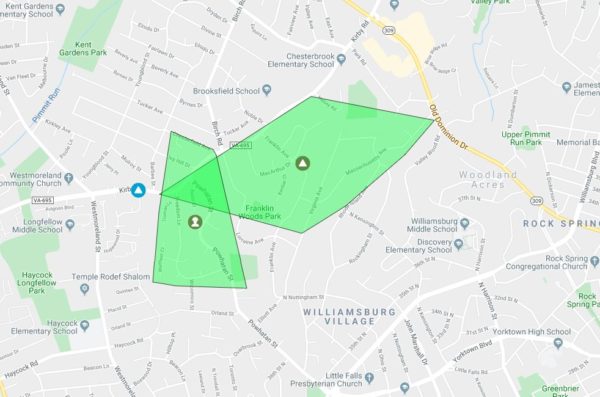 A crash early this morning led to a power outage and closure of Kirby Road that is still affecting people in McLean.

The Fairfax County Police Department tweeted about the road closure at that intersection shortly this morning (Tuesday), adding that people can expect the closure to last “for an extended period due to downed wires.”

Police urged people to avoid the area and find another route.

As of 9 a.m., a police spokesperson told Tysons Reporter that the intersection is still closed.

Dominion Energy’s power outage map shows two outages in the area – one affecting 247 customers at the intersection of Kirby Road and Powhatan Street and another one affecting 214 customers spanning from Birch Road to Old Dominion Drive.

Both outages are expected to be resolved before 5 p.m., Peggy Fox, a spokesperson for Dominion Energy, told Tysons Reporter.

Fox said that repairs will include replacing the pole and wires.

TRAFFIC ALERT: Kirby Road at Freedom Lane in McLean will be closed for an extended period due to downed wires. Please avoid the area and use an alternate route. #FCPD pic.twitter.com/N1E3qITkL9