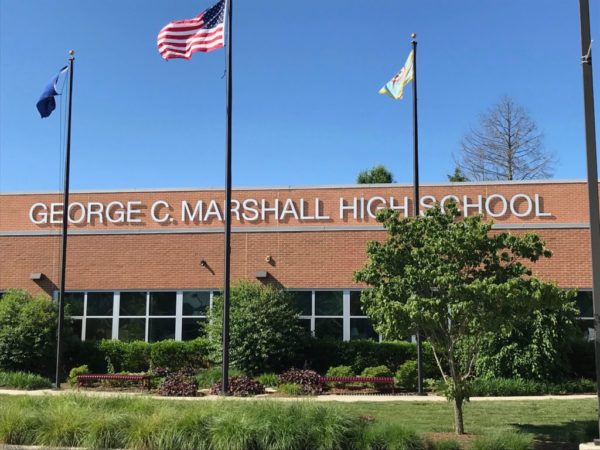 A smell of burnt material prompted students to evacuate from Marshall High School this afternoon (Wednesday).

Fighterfighters from Fairfax and Arlington counties responded to the Tysons area school (7731 Leesburg Pike) for an “odor of burnt material,” Fairfax County Fire and Rescue tweeted at 1:35 p.m.

“Believed to be an HVAC unit. There is NO fire or smoke,” the tweet said.

All of the students have been evacuated from the school and the “situation is under control,” according to Fairfax County Fire and Rescue.

In an email to the “Marshall Family,” Principal Jeffrey Litz said that everyone went back inside the school around 1:50 p.m. after fire department personnel conducted air quality tests.

“The facilities department of Fairfax County Public Schools will continue to investigate the cause of the alarm,” Litz wrote.

Today, the students and staff of Marshall High School were evacuated from the building at approximately 1:25 PM when the fire alarm rang as a result of some smoke in a classroom from a rooftop air conditioning unit. All students and staff members left the building in an orderly fashion, and everyone was immediately determined to be safe and accounted for.

The fire department responded promptly and determined that there was no fire and no safety risk existed. Fire department personnel conducted air quality tests and subsequently allowed everyone to return to the building. The facilities department of Fairfax County Public Schools will continue to investigate the cause of the alarm.

While the fire department was investigating to determine the cause of the alarm, all students and staff were outside until students were allowed back in their classrooms at approximately 1:50 PM. All of this was done in an organized fashion, and students were always under adult supervision.

Thank you to everyone who cooperated during our dismissal procedures. We are pleased that no real problem was detected, and our emergency plans were effective. We will still hold Back to School Night this evening and look forward to seeing you soon.

The building was evacuated following a fire from an air conditioning unit on the roof that caused smoke to fill certain C200 classrooms. More information to come later. pic.twitter.com/uHJeylEz5W

Units on scene 7700 block of Leesburg Pike, Marshall High School, with a odor of burnt material. Believed to be an HVAC unit. There is NO fire or smoke. All students safely evacuated. Crews working to narrow down HVAC unit. Situation under control. @fcpsnews @MStatesmen pic.twitter.com/b7kLSibiez

END_OF_DOCUMENT_TOKEN_TO_BE_REPLACED

More Stories
Luxury for Less: September 11UPDATED: More Than 4,000 Without Power in Vienna