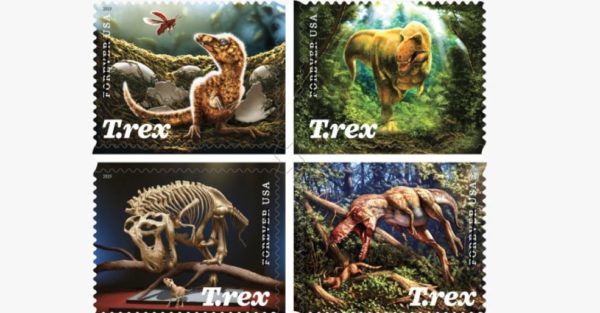 To celebrate new T-Rex stamps, the U.S. Postal Service will spotlight pictorial postmarks created by local kids with events at three Virginia post offices — including one in Vienna.

More from the U.S. Postal Service about the stamps:

One design illustrates a face-to-face encounter with a T. rex approaching through a forest clearing; another shows the same young adult T. rex with a young Triceratops — both dinosaurs shown in fossil form.

“The Nation’s T. rex,” the young adult depicted on two of the stamps, was discovered on federal land in Montana and is one of the most studied and important specimens ever found.

On Saturday, a T-Rex pictorial postmark created by a local 13-year-old will be available for “Customer Appreciation Day” at the Vienna Post Office.

“The event is an opportunity to show our customers how much we appreciate their business, answer their questions, and to celebrate a very special pictorial postmark specific to this community’s Post Office,” Postmaster Joquita Allen said.