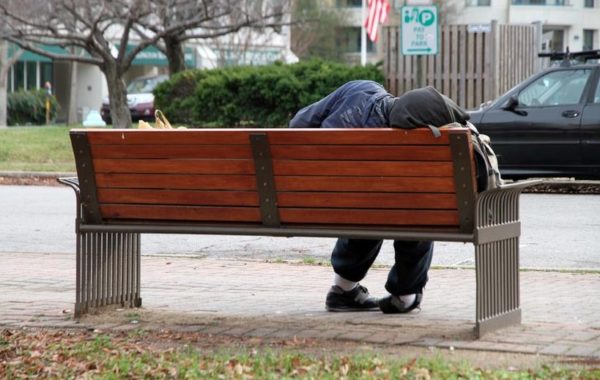 The Tysons area might see fewer panhandlers in the future now that Fairfax County is looking to discourage them on medians and intersections.

On Tuesday (July 16), the Fairfax County Board of Supervisors approved a board matter that would prohibit “curb to curb” interaction between drivers and pedestrians.

“[Panhandling] has become massively greater,” Cook told the board, adding that it is dangerous for both the panhandlers and drivers. “It is a public safety issue.”

Providence District Supervisor Linda Smyth pointed to examples in Tysons for how panhandling is becoming more frequent along more roads in the county.

“I see it daily at Nutley [Street] and Lee Hwy,” Smith said, adding that panhandlers along major roads undergoing work could pose safety hazards to drivers.

“And this is just another complication to have panhandlers there when people are trying to figure out [how to drive around construction on] Route 7 in Tysons,” she said. “People have complained about the fact that it isn’t safe for [panhandlers] to be out there.”

More from the board matter:

The board has sought to help those panhandlers in need by committing a significant portion of the county budget to providing services for those residents who are down on their luck. The board has encouraged residents to direct panhandlers to these county resources including shelters, food banks, health and job matching services, instead of giving small amounts of money. It is vitally important that we connect those in need with the right services and disincentivize panhandling.

Although homelessness in the county is shrinking, panhandling by roadways is becoming more and more prevalent. In 2017 alone, the Fairfax County Police department received over 2,100 calls related to panhandling and many more have been received by district offices. These calls detailed traffic issues, concerns about panhandler safety, and fears about a suspicious person at an intersection. As a county we devote significant resources to helping our residents in need and to keeping all our residents safe.

This isn’t the first time concerns about panhandling have popped up in Fairfax County. Commenters on a Reddit thread last year bemoaned a seemingly increasing number of panhandlers in Tysons.

Fairfax County Police Department has encouraged people to not give panhandlers money. “While we may get a good feeling by providing money to a panhandler, the reality is that panhandlers who are truly in need require more resources than small amounts of money,” according to the county’s website.

Cook and Herrity also pointed to other nearby jurisdictions, including the City of Winchester and Clarke and Frederick counties, for their “curb to curb” rules that restrict people on medians and intersections interacting with drivers.

The Board of Supervisors approved the board matter, which directs the county staff to create a proposed ordinance that would prohibit “any engagement of pedestrians with cars while on medians or intersections.” It notes that the ordinance would not restrict people’s free speech rights on sidewalks or affect kids’ advertising car washes.

The board will consider the proposal at the Public Safety Committee meeting on Sept. 17.