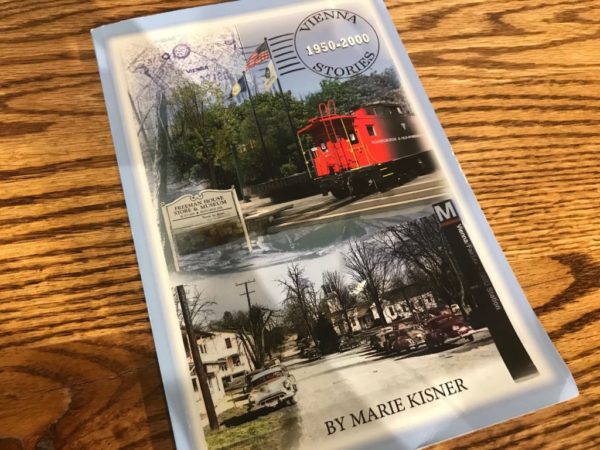 A new book recounts tales about the Town of Vienna from the 1950s to early 2000s.

Marie Kisner, a former public information officer for the Town of Vienna, collected and compiled newspaper stories about Vienna for her newly released book, “Vienna Stories 1950-2000.”

“It basically fell in my lap,” Kisner told Tysons Reporter. In the early 200os, the Town’s clerk office decided to give dozens of boxes of news article clippings to Kisner, who sorted through the clippings.

“I didn’t have to go back and try to find a lot of old timers and pick their brains and see if they could remember these things,” Kisner said.

Originally, Kisner said that she sorted the articles chronologically, but then decided to organize the book by recurring themes, like animals, beautification, businesses, civil rights and politics.

“People need to know they can’t sit back and hope — hope — that Vienna will stay Vienna,” Kisner said. “I think development has always been like issue #1.”

Kisner said that she not only wrote the book to preserve its history from the news articles, but also to remind current residents of the struggles the town has gone through to maintain its unique character.

“One of the reasons I wrote the book is so people who live in Vienna now who think, ‘Oh what a wonderful town we’ve got,’ they will realize it didn’t happen by accident,” Kisner said. “It took a lot of hard work by a lot of people to make and keep Vienna the way it is, and those same issues keep coming up.”

While Kisner does not cite throughout the book, “Acknowledgements” section includes a list of the news publications that the articles came from:

“My thought was if I cited every single newspaper reference, the book would probably be twice as thick and it would break up the narrative too much,” she said.

Since the book is based on the articles, Kisner decided to refer to herself in the third person, saying “Right now I’m just part of the cast of characters in this book.”

Kisner, who now lives in Texas, is set to come back to Vienna for a book talk and signing next Thursday (June 20) at 7:30 p.m. at the Vienna Community Center (120 Cherry Street SE).

She will also sign books during the Antiques and Collectibles Evaluation event at the Freeman Store (131 Church Street NE) next Saturday (June 22) from 11 a.m.-1 p.m.

Book lovers and history buffs can buy the book for $12.99 at the Freeman Store. All of the proceeds from the book will go to the town’s historical society.