The Vienna Police Department is offering tips for how to prevent stolen cars and vehicle tampering after a recent spate of car-related crimes.

“With the advent of warmer weather, the Town of Vienna Police Department would like to remind all Town of Vienna residents to secure their vehicles and personal belongings,” the reminder says. “Recently there have been several vehicle tamperings to include stolen vehicles from Vienna and the neighboring jurisdictions.”

The last week in May saw a dramatic increase for the month with a total of 21 car-related crimes, according to the weekly police highlights. 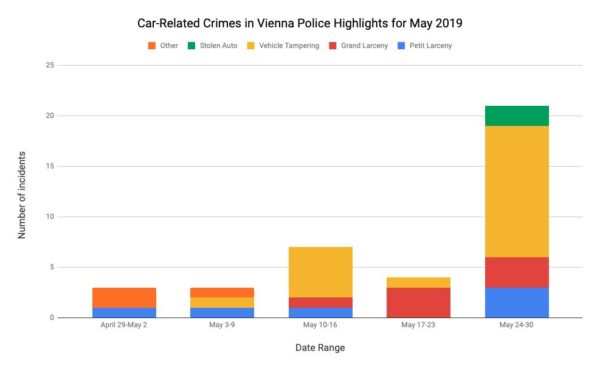 Earlier in the month, the weekly crime reports ranged from three to seven car-related crimes.

While the police highlights are not a comprehensive list of every incident, they provide “a more substantive summary of several incidents, which may be of interest to the community,” according to the Town of Vienna.

“In some cases, the subjects have been observed wearing several layers of clothing, not consistent with the weather conditions,” according to police. “This is used to conceal stolen items and also to make identification difficult as they will shed layers of clothing as they flee the area when they suspect they have been observed committing a crime.”

In ToV police incident reports from 5/24-30, there were reports of items stolen from 12 vehicles, 11 vehicles rummaged thru, and 2 cars stolen. What did they all have in common? The vehicles were unlocked! Vienna PD reminds residents to lock car doors & remove valuables. pic.twitter.com/bhfKPZeism