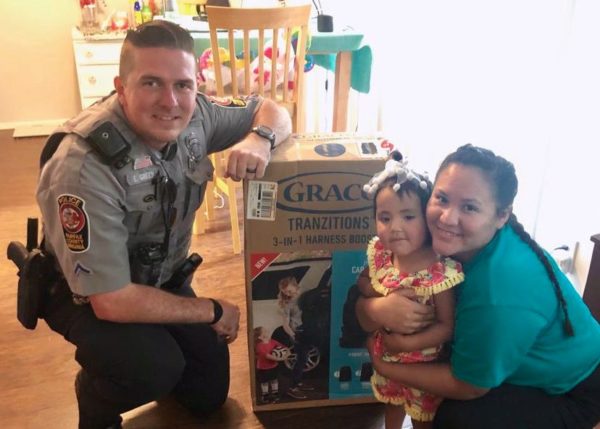 Fairfax County police officers decided to chip in to buy a new car seat for a Merrifield mom after she was in a car crash.

It all started when Officer E.J. Green from the McLean District Station stopped to make sure everyone in a two-car crash in Merrifield on Sunday (May 26) was all right.

No one was hurt, although one of the cars needed to be towed. Its driver — a mom who lives in Merrifield — decided to walk home.

“Green offered to take her child’s car seat to her so she wouldn’t have to carry it, but quickly noticed that the car seat was old and in rough shape,” the Fairfax County Police Department wrote in a Facebook post.

Green then talked to the rest of the McLean daywork — the A squad — about how the car seat wouldn’t protect the child, and they all decided to pool their money to buy a new car seat for the mom.

Green and Officer Brian Hungarter surprised the mom and her daughter with the new car seat about an hour and a half later at 1:30 p.m., a spokesperson for the police department told Tysons Reporter.

“The woman was grateful, calling the officers’ actions sweet, kind and unexpected,” the police department wrote on Facebook. “We applaud these officers for making a positive difference in the lives of our community members!”