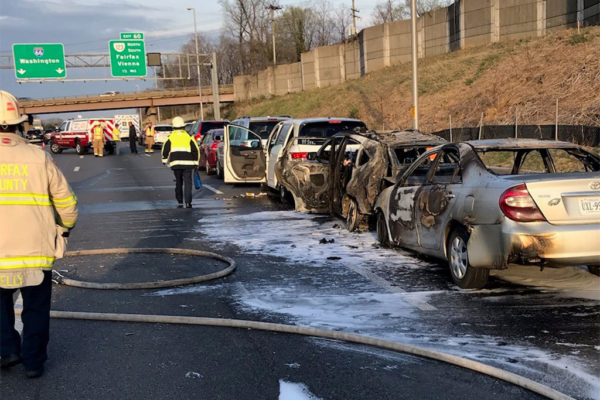 Virginia State Police is investigating a chain reaction crash on I-66 near Oakton that happened during last night’s evening rush hour.

The crash — near the Chain Bridge Road exit — involved 14 vehicles, two of which caught fire after the wreck, but only one minor injury was reported.

“At approximately 5:50 p.m., Virginia State Police received a call about a two-vehicle crash in the eastbound lanes of I-66 near Exit 60,” said VSP spokeswoman Corinne Geller. “As oncoming traffic swerved to avoid those vehicles and then one another, a chain-reaction crash occurred. In the end, there were 12 vehicles in the chain reaction crash. The last two vehicles caught fire.”

Geller says the crash is still under investigation but charges against at least one of the drivers are pending.