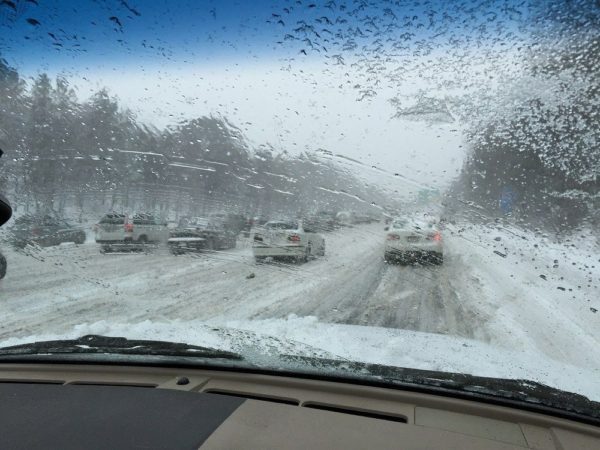 Fairfax County Public Schools will be closing two hours early on Tuesday due to expected winter weather which may lead to a messy evening commute.

The school system made the announcement late Monday afternoon.

Due to the anticipated snow and freezing rain in the forecast tomorrow afternoon and evening, and the possibility of deteriorating travel conditions, all Fairfax County public schools and offices will close two hours early Tuesday, Jan. 29, 2019 (Cond 4). https://t.co/zNBBMjWGwr

The National Weather Service has issued a Winter Weather Advisory ahead of the wintry precipitation, warning of “hazardous conditions” on the roads.

More from the National Weather Service:

…WINTER WEATHER ADVISORY IN EFFECT FROM 3 PM TUESDAY TO MIDNIGHT EST TUESDAY NIGHT… * WHAT…ANY RAIN WILL CHANGE TO SNOW DURING THE LATE AFTERNOON AND EARLY EVENING HOURS. TOTAL SNOW ACCUMULATIONS OF 1 TO 2 INCHES EXPECTED. * WHERE…THE DISTRICT OF COLUMBIA, AND PORTIONS OF CENTRAL AND SOUTHERN MARYLAND AND CENTRAL AND NORTHERN VIRGINIA. * WHEN…FROM 3 PM TUESDAY TO MIDNIGHT EST TUESDAY NIGHT. * ADDITIONAL DETAILS…PLAN ON SLIPPERY ROAD CONDITIONS. THE HAZARDOUS CONDITIONS WILL IMPACT THE EVENING COMMUTE. TEMPERATURES WILL FALL BELOW FREEZING DURING THE EVENING, CAUSING ANY MOISTURE OR SLUSH TO FREEZE ON UNTREATED SURFACES. PRECAUTIONARY/PREPAREDNESS ACTIONS… A WINTER WEATHER ADVISORY FOR SNOW MEANS PERIODS OF SNOW WILL CAUSE PRIMARILY TRAVEL DIFFICULTIES. EXPECT SNOW COVERED ROADS AND LIMITED VISIBILITIES, AND USE CAUTION WHILE DRIVING. THE LATEST ROAD CONDITIONS FOR THE STATE YOU ARE CALLING FROM CAN BE OBTAINED BY CALLING 5 1 1. &&

Winter Weather Advisories have been issued for portions of the area Tuesday and Tuesday evening. See the graphic and https://t.co/t54l4ELo2o for more information. pic.twitter.com/EORvDlHnkW

Be prepared for an impacted Tues PM commute. Snow is forecast to hit around that time. Be aware that temps will drop (freezing) and the winds will pick up. Pls plan to leave work or be home a little early. Clear the roads so we can clear the roads. #teamwork pic.twitter.com/TuDjXbw29S