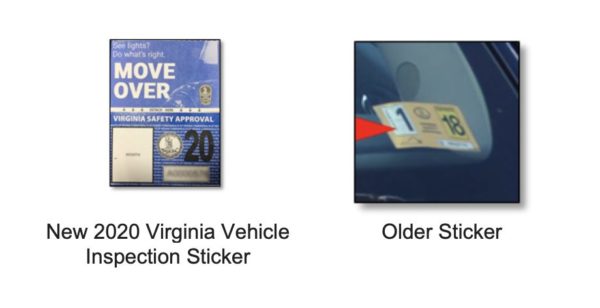 The new stickers were first issued by inspection stations at the beginning of January, according to Virginia State Police.

The stickers are smaller, in response to complaints that the new sticker placement on the bottom left of the windshield, which started in 2018, resulted in reduced visibility for drivers. The stickers also come on a backing that reminds drivers to move over for emergency vehicles stopped along the side of the road.

More from a VSP press release:

The Virginia State Police Safety Division is rolling out a newly-designed vehicle safety approval inspection sticker that now includes a traffic safety message. Effective Jan. 1, 2019, all certified Virginia inspection stations began issuing the sticker which has been reduced from 2.75 inches in height to 2 inches and from 4 inches in length to 3 inches. The year of expiration is now permanently affixed to the right side of the sticker, with the only insert being the month of expiration. Even though the overall size has been reduced, the month has been enlarged to provide better visibility.

“The change in size is in response to the feedback State Police received from Virginians following the sticker’s relocation to the bottom left corner of the windshield in 2018,” said Captain R.C. Maxey Jr., Virginia State Police Safety Division Commander. “We heard from a number of motorists who had difficulty seeing around the sticker, so we worked to reduce its size to slightly smaller than the average credit card.”

The sticker’s security features have also been enhanced in order to discourage and prevent unauthorized removal, tampering and counterfeit practices. The changes in size and design do not apply to motorcycle or trailer safety inspection stickers. Vehicle rejection stickers also remain unchanged.

Another new feature of the inspection sticker enables State Police to reach an estimated 8.2 million motorists annually with a reminder about Virginia’s “Move Over” law. This portion of the sticker is not for display on the front windshield. Instead, it is detached by the inspector and provided to the customer. Virginia’s “Move Over” law requires motorists to move over a lane when approaching an emergency vehicle stopped alongside the road. If unable to move over, then drivers are required to cautiously pass the emergency vehicle. The law applies to all vehicles equipped with red, blue and amber lights.