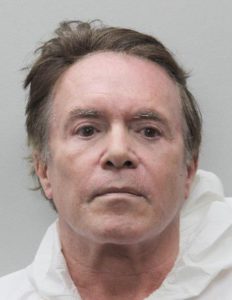 A Great Falls man has been arrested and charged in yesterday’s robbery of the Wells Fargo Bank near the Old Brogue Irish Pub.

Police throughout Fairfax County were told to be on the lookout for the suspect after he demanded and received money from a teller and then demanded the keys to her SUV. Police officers, sheriff’s deputies, detectives, SWAT team members and two police helicopters helped in the search for the suspect, who was later arrested and identified as 60-year-old Christopher Lapp.

BANK ROBBERY: 750 Walker Road (Wells Fargo Bank), 11/13/18, 11:39a.m. A man entered the bank carrying a handgun and handed the teller a note and a bag, demanding money.  After the teller gave the suspect money, he walked out of the bank and followed another customer to her car and told her to give him the keys to her SUV.   She gave him the keys and the man then drove away towards the back of the shopping center.  Her abandoned car was recovered nearby a short time later.  Witnesses described the suspect as approximately, 5’07” and wearing a beige mask, black baseball cap, sunglasses, a beige jacket, and dark pants with two blue or purple stripes down the sides. Many entities responded to assist in the search to include our SWAT Team, robbery detectives, patrol officers, Fairfax County and U.S. Park Police helicopters, and Fairfax County Sheriff Deputies.  60-year-old Christopher Warren Lapp, of Great Falls, was found in the area matching the description and was ultimately charged with armed robbery, carjacking, and two counts of use of a firearm in the commission of a felony in connection with the robbery.  He was transported to the Adult Detention Center and held without bond.

END_OF_DOCUMENT_TOKEN_TO_BE_REPLACED

More Stories
Theft Suspects Arrested After Foot Chase at Tysons Corner CenterA Look at Scotts Run, the Tysons Development That Apple Has Its Eye On