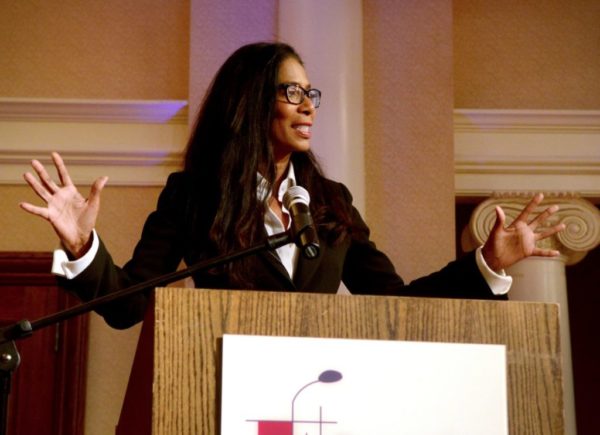 Judy Smith, the crisis management expert whose career served as the inspiration for the hit TV show Scandal, has been added to the lineup for Social Media Week Fairfax.

The event, which was originally scheduled to take place on Sept. 14, was rescheduled due to Hurricane Florence and is now happening Oct. 18.

Crisis management advisor Judy Smith, who has served as a consultant to high-profile celebrity and entertainment clients including Monica Lewinsky, Congressman Jesse Jackson Jr., actor Wesley Snipes and the family of Chandra Levy, has been added to the list of keynote speakers who will take part in Social Media Week Fairfax on October 18.

SMWFairfax, presented by the Fairfax County Economic Development Authority (FCEDA) will take place at Capital One headquarters in Tysons Corner, bringing together leading influencers, marketers, entrepreneurs and digitally-connected consumers who thrive in the hyper-connected world and push the boundaries of the status quo.

Judy Smith’s wide-ranging and ground-breaking career served as inspiration for the hit TV series Scandal, created by Shonda Rhimes, who also created ABC hit dramas Grey’s Anatomy and Private Practice. Smith served as co-executive producer of Scandal, providing insight and technical expertise to a show that revolved around the life and work of a professional fixer.

Smith is founder and president of Smith & Company, a leading strategic advisory firm with offices in Washington, D.C., Los Angeles and New York. In the last 25 years, she has brought her unique combination of communication skills, media savvy, legal and political acumen to clients facing a wide array of issues and challenges.

A former federal prosecutor, she also served in the White House as deputy press secretary to President George H.W. Bush. She has honed her skills thanks to experience with some of the most historic and sensational events of our time including the Iran Contra investigation, the prosecution of former D.C. Mayor Marion Barry, the 1991 Gulf War, the Los Angeles riots, the Bill Clinton/Lewinsky scandal, the congressional inquiry of Enron and the Sony Corp. hacking crisis.

Author of the book Good Self, Bad Self, Smith received her Bachelor of Science degree in public relations from Boston University and graduated from the American University Washington College of Law, where she was the first African-American woman to serve as executive editor of the Law Review.

Her keynote conversation at Social Media Week Fairfax will examine crisis management in the digital age.